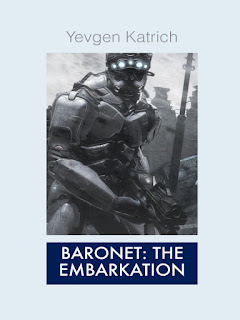 Ashes… Ashes and dust were all around, falling down like snow, covering the entire valley.… Overhanging the perch was a man standing in a black antiglare pressure suit and resting on a Glock 3A assault rifle. On his left leg there were two apertures already sealed by emergency repair foam but still bearing traces of blood. In front of him were ruins of a research centre on the Routh Planet, planetary system RS-1108, hardly known to anyone.
His name was Rich Eivur and he was the younger son of Baron Oudor Eivur of the Free Baronage, part of the Waytoo Empire. He was observing the remains of the research centre smouldering after the planetary bombing campaign and could not comprehend the necessity of so many casualties. It was just mind-boggling that so many people have perished for the sake of some run-down planet — even if one believed the hardly plausible rumours that there were some valuable resources discovered on this planet or some ancient artefacts detected. But can a single artefact be worth two space fleets engaging confronting each other? Is it worth the lives of ten thousand commandos plus auxiliary personnel? Only the free Baronages have, by request and requirement of the Empire, provided the third generation airborne transport carrying two squadrons of commandos onboard, supported by five torpedo destroyers, two frigates, and two third generation cruisers. This amounted to as much firepower as the Baronages could possibly afford.
— Sir? — called the sergeant, interrupting the thoughts of Baronet Rich Eivur.
— Report the situation, sergeant. — Sergeant Kirkit was a well-grown man, a bit long in the tooth, and one of the few company officers among survivors. He was standing right next to his commander in a third generation Shield 3A airborne onslaught spacesuit bearing the traces of the recent battle.
— The camp is deployed, the technicians are finalising the installation of the defence perimeter, and medics have arranged the field medical centre. There are lots of injured, sir, — reported the sergeant.
— Any estimations on the squadron casualties, sergeant? — in the bloodbath, the squadron lost almost all of its officers and there were only three sergeants left standing. The two surviving lieutenants had injuries. — How many men are we about to bury today?
— Two hundred forty two commandos and twenty-six technicians, but the final estimation will only be ready by morning, sir. Those who make it through the night are about to live — so said lieutenant Thoyce Rucks’s medical team.
After the spaceship group of the free Baronages joined the forces of the Waytoo Empire Assault Fleet in the Choyrce 2 Sector, the fleet used the acceleration blocks to leap into the RS-1108 system. As Rich has been able to ascertain afterwards, the RS-1108 system was situated relatively far away for standard hyperleaps made by spaceships. A third generation cruiser was able to leap into the system but as far as the return leap was concerned, she was low on fuel. This is precisely they resorted to accelleration blocks which were handy in remote systems which were not equipped with hypergateways. These acceleration blocks have, however, not been cheap. For him, this was the first evidence signalling that this was not just a conflict between the Waytoo Empire and the Republic.